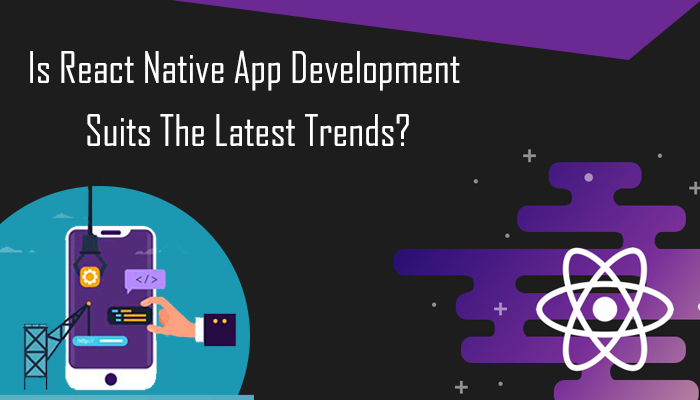 Mobile technology has expanded over a vast range from the last few years. Most of the website has been transformed into a mobile application. Why mobile applications are so important? Nowadays, mobile is a basic need of every individual. The application plays an essential role in the importance of mobile phones.

Millions of mobile applications are available on Google’s Play Store and Apple’s App Store. How do we select which mobile application is the best fit for us? Well, It depends on our usage. There are a few things that we consider before installing any application, which are its design, performance, high-security, amongst others.

A solution to all of these difficulties arrived when cross-platform app development get introduced to the developers, and it took the mobile application development to a whole new level.

React Native is an open-source platform on which the developer shares the portfolio and ideas which are available for community members around the globe. The community-driven technology is useful as it provides the developers with a variety of ideas to consider for the code. React Native provides developers a platform to ask their queries and make a discussion with the experts of the community.

The code in React Native is reusable, i.e., the developers don’t have to write code for each platform. And this practice saves time and cost that makes it unique. One of the useful things about the React Native is that the same code is being reused for web applications. Using React Native reduces the development time and makes the process of app launch fast. Because React Native is an open-source library. Codes can be reused and implemented as per the application’s requirement.

React Native compiles and reads the file where changes made, and this allows automatic reading from the applications at the starting.

A hot reloading feature protects the updated file while the app is running the application. There is a one-minute time difference between these two features that come when saving the changes. It is easy to modify the code; hence developers don’t need an app recompilation of reviewing the code.

The outcome of the mobile app development is displayed instantly after making the changes. It further reduces the waiting time to see the modifications.

React Native provides support to the third-party plugins as it, by default, included native modules and JavaScript modules in its package. You can use a variety of third-party plugins in your application without any trouble. Now you have a diverse range of choices available to make the app user-friendly & feature-rich.

The React Native acknowledges its offering of data binding. It makes the application more effective and increases its reliability. If any modification changes are needed, it made first, and afterward, the updating process appears.

React Native is an open-source, cross-platform app development framework. Developers all around the world share their designs and code with the community. It allows everybody to reuse the code and to customize it according to their own needs. It helps the developers to regularly improvised and improves their designing skills. There are various options for UI designs. React Native suggests responsiveness and creative designs and decreases the loading time.

Something About React Native!

React Native is created by Facebook and has an MIT license; it means it is open-source and free. It is used to create an app for platforms like Android, iOS, and windows. The base of this platform is JavaScript.

Is React Native is time-consuming for development?

It runs everywhere with one-time writing, which means code is written once and runs on multiple platforms. It will take less time to compare to Native to produce an application.

By selecting React Native, we can save time and get benefitted from the cost-effectiveness. Everyone wants and like to use technology, which profits them, save their time as well as reduce their cost. React Native comes with vast options for designs, and it is one of a key point to maintain and increase the user’s attention towards the application. We can say that React Native took the mobile app development to the next level, and it continues to grow more to benefit the application development in the future.

The last comment and 2 other comment(s) need to be approved.
0 replies

Want to join the discussion?
Feel free to contribute!

Top Reactjs Features Which Make It Best For Development

Top Trends of Web Development to Follow
Scroll to top

This site uses cookies. By continuing to browse the site, you are agreeing to our use of cookies.

We may request cookies to be set on your device. We use cookies to let us know when you visit our websites, how you interact with us, to enrich your user experience, and to customize your relationship with our website.

Click on the different category headings to find out more. You can also change some of your preferences. Note that blocking some types of cookies may impact your experience on our websites and the services we are able to offer.

These cookies are strictly necessary to provide you with services available through our website and to use some of its features.

Because these cookies are strictly necessary to deliver the website, refusing them will have impact how our site functions. You always can block or delete cookies by changing your browser settings and force blocking all cookies on this website. But this will always prompt you to accept/refuse cookies when revisiting our site.

We fully respect if you want to refuse cookies but to avoid asking you again and again kindly allow us to store a cookie for that. You are free to opt out any time or opt in for other cookies to get a better experience. If you refuse cookies we will remove all set cookies in our domain.

We provide you with a list of stored cookies on your computer in our domain so you can check what we stored. Due to security reasons we are not able to show or modify cookies from other domains. You can check these in your browser security settings.

These cookies collect information that is used either in aggregate form to help us understand how our website is being used or how effective our marketing campaigns are, or to help us customize our website and application for you in order to enhance your experience.

If you do not want that we track your visit to our site you can disable tracking in your browser here:

We also use different external services like Google Webfonts, Google Maps, and external Video providers. Since these providers may collect personal data like your IP address we allow you to block them here. Please be aware that this might heavily reduce the functionality and appearance of our site. Changes will take effect once you reload the page.

The following cookies are also needed - You can choose if you want to allow them: